The Manor of Glossop, mentioned in the Domesday Book, was first gifted by William I to his son and then in 1157 by Henry II to the Abbot and monks of Basingwerke.  Glossop therefore enjoyed a long history of Catholic worship in the pre-Reformation period, with the main church building being where the present Anglican church  sits in Old Glossop.   From the troubled period of the Reformation and Dissolution of the Monasteries, the name of Nicholas Garlick, a  native of Dinting, is well known.  He was executed in 1588 for being a priest who refused to recant his faith and was beatified by Pope John Paul II in 1987.

In 1606, Glossop became part of Howard family property by marriage but was left relatively undeveloped until Ralph Standish Howard built Glossop Hall in 1729.   From the early 1730’s, Catholic priests were brought in as chaplains to the family in residence, and so began the continuous ministry to the Glossop faithful of the modern era.  By 1803, the congregation had grown large enough to merit a full time priest in the person of Fr. Joseph Barbe, one of a large number of clergy who had fled France after the Revolution.  His long-term successor was the popular and charismatic Fr. Fauvel, who remained the Parish Priest for over thirty years and probably did more than any other to advance the building of the Catholic community in Glossop.

During the first half of the 19th century, the parish of Glossop continued to grow and with the explosion of the local textile industry, a new town, named Howardtown sprang up along the nearby Etherow River.  Father Fauvel’s plan to found a separate parish in the new Howardtown received a serious setback with the depression of the early 1860s caused by the American Civil War, and by the time the local trade had begun to recover from this, death had taken him from the scene. His sad loss on 9th January 1865 meant the end of an era, and his thirty-four years’ span as parish priest of All Saints.  The All Saints Parish and two new schools which he bequeathed to his successor, Father Charles William Tasker, were a memorial to his untiring efforts in the Catholic cause.

Following the sad loss of the popular and hard-working parish priest Father Fauvel on 9th January 1865, Canon Tasker became the resident priest, first at All Saints and then at St. Mary’s.  Fr. Fauvel had already laid the foundation for the building of St. Mary’s in concert with Francis Sumner, a successful mill owner and first mayor of the Glossop borough.  In a letter to the Duke of Norfolk of 31st January 1852, they sought permission to build a new Catholic church to meet the needs of the growing population of mill workers. 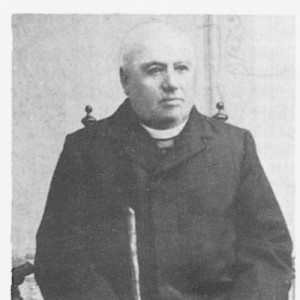 Having been the means of introducing into this neighbourhood a large increase of population, for the adult members of which, many of whom are Catholics, my Factory affords employment; I have therefore thought it incumbent upon me to provide for the Catholic, as well as for other children of such population, the means of instruction in the simple rudiments of education. For this purpose I propose to erect a school in the immediate neighbourhood of my Factory, in accordance with the spirit of the Factories Regulation Act, which renders it necessary that the school so provided should be near to the Factory where the children are employed, provided Your Grace will so far assist in such objects as to grant me a lease of a site for the intended erection, at such an annual rent as Your Grace may deem proper under existing circumstances. Relying on Your Grace’s favourable consideration of my application.

I have the honour to remain Your Grace’s Most faithful and most obt. Servant 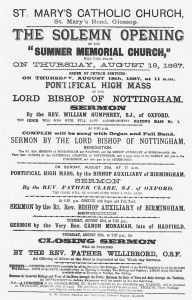 The letter is endorsed on the reverse with the simple words “The Duke consents”.  Despite this important victory, troubled economic conditions meant a delay of some 20 years before work on the building of St. Mary’s could start.  In the meantime, Fr. Tasker continued to be based at All Saints, ministering to an ever-growing parish, including two schools.  Curates who may have ministered in the Howard-town Mass centre during these years are unknown to us, and the only names which have come down to us are those of John van Aken (died 1869) and John Clarke (died 1875), both buried in Glossop Borough Cemetery.

We’d love to see you join us!