Celebration and messages for Fr. Martin from the children of All Saints and St. Margaret's Catholic Primary Schools on the occasion of his 30th anniversary of ordination.
Slideshow
View 12 photos

Parishioners joined together for a cuppa, a bacon butty and plenty of good company.
Slideshow
View 2 photos

Altar servers Katie Mallon of St.Mary’s, Benedict Elliott of All Saints and Miriam Kennedy of St. Charles attended the Annual Servers Mass for the Guild of St. Stephen at the Cathedral with Guild Council Member Christine Hulley and Kathryn Kennedy. It was a wonderful Celebration.

The girls had a lovely walk on 3rd August up to Hargate Hill and lunch in the cafe. It was hard to keep up with Anne who was full steam ahead!
Slideshow
View 2 photos

21-22 May 2016. These pics were taken at Saturday evening's performance. It was brilliant. Well cast, well performed, well directed and presented. Most enjoyable and a good laugh to boot. Very well done to all involved.
Slideshow
View 7 photos

All Saints Catholic Church was full to capacity on Saturday to celebrate 50 years of married life for Maddy and Peter Brown, their Golden Wedding Anniversary. Also celebrating special anniversaries were Bernard and Kath McMylor, 55 years and friends June and John Bigger, also 50 years. The beautiful church was already filled with music as family and friends were welcomed by Maddy and Peter, son Nik and daughter Caroline and their four grandchildren. With a break from tradition, close friend, Lys, from the Jewish community set the scene for the Mass by lighting candles and calling for blessings according to Jewish family tradition. In this case, a candelabra with 5 candles, one for each decade of married life. Then Maddy and Peter together lit a special candle provided by one of guests - 'and the two became one'. Then Began the Opening Hymn led by Andrew Elliott and the most amazing group of musicians and choristers. Music throughout the Mass was "out of this world". In addition to parish priest Fr Greg Tobin and Monsignor Jonathon Moore, six other priests were celebrating on the Altar. All close friends of Maddy and Peter. Main Celebrant was Fr Michael Winstanley and Frs Francis and Hugh Preston, twin brothers who like Fr Michael are Salesians of Don Bosco. Fr Paul Hughes from Hattersley and Frs John Rigby and Brian Murphy, both Salford Diocese. Mass was beautiful, such a happy family occasion. After Mass everybody made their way to St Mary's parish hall for a scrumptious shared table, with a variety of delicious platters provided by many of the guests. Vintage cups and saucers waited on tables for teapots to warm everybody up. Beautiful table decorations were provided by Maddy's niece, Claire Farr. Wine flowed and there was a champagne toast, provided as presents from one or two guests. What a wonderful occasion. Chris Strogen and Chloé Smee Brown took photographs throughout to provide Maddy and Peter with lasting photographic memories. Heartfelt thanks to them and to all who helped prepare the church and the hall and clean up afterwards. Caroline, Eilish, Eileen, Dave, Ayden, Peter, and Sue and Moira, what stars you are. A thousand thanks from Maddy and Peter.
Slideshow
View 10 photos

CAFOD - LENT 2016 A fantastic Lent for CAFOD! Many parishioners took part in the CAFOD Breakfast and St Patrick's Celebration during Lent. These were both great community events in which funds of £1753.83 were raised!
Slideshow
View 9 photos

Sacrament of Confirmation for the High Peak Deanery at St. Mary Crowned, Glossop on 14th May 2015. Photos of each individual receiving the sacrament are available.
Slideshow
View 5 photos

Each year at the start of May (the month of Mary) we crown her statue with flowers and process around the church to honour her as "St. Mary Crowned".
Slideshow
View 3 photos 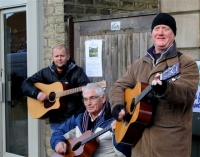 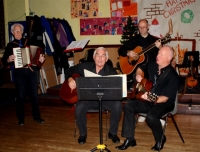 In Norfolk Square, Glossop on 1st December. The Glossop parishes ran the mulled wine stalls (what else?) and sold out very quickly.
Slideshow
View 2 photos

St. Mary's new Eucharistic Ministers, commissioned on the 16th November 2013. Our thanks and congratulations! 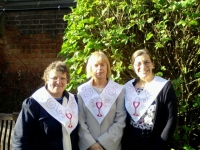 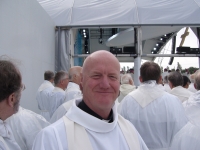 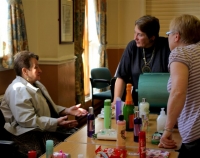 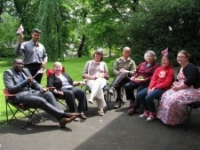 Because of measures to control coronavirus, people must book a place to attend Holy Mass. Some churches are open for private, silent prayer.